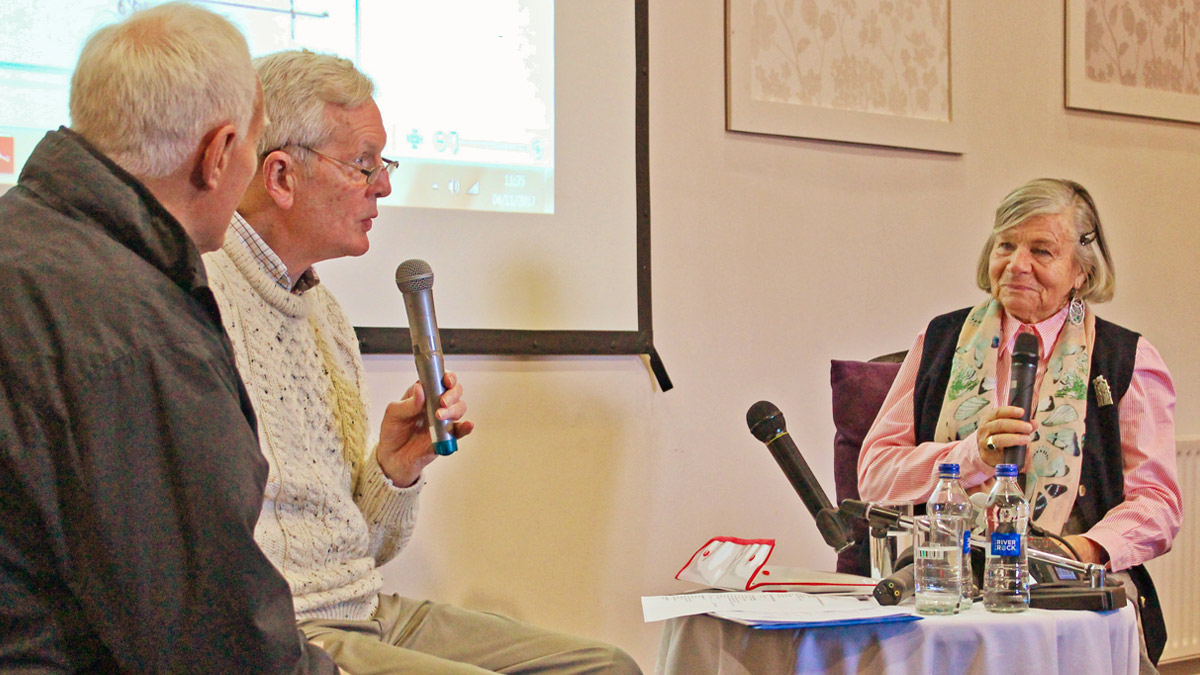 “The Holy Spirit is most definitely in my work”, said Imogen Stuart, one of Ireland’s foremost sculptors. She was answering a question put to her by Brian Grogan SJ, in an open interview in the Knock House Hotel, Knock on Saturday 4 November. Over sixty people turned up to learn more about the artist, just turned 90 this year, who was talking around the general theme of art as ‘a pathway to the divine’. It was by any measure, an unforgettable morning. As Imogen discussed various aspects of her life and art down the years, her grandson Émile flashed images of her work on a large screen behind her – an audio-visual treat.

Brian noted that many of those present, viewing her work on screen, would have be more than happy to have a piece. Imogen responded by saying that she felt strongly that people should be able to buy good sacred art work for their homes. She said too much of the stuff now available is neither good or uplifting, and she believes that if people had a chance to buy quality works they would do so. “They could buy a piece like my  holy-water font as a wedding gift or birthday present,” she said, explaining that she had been approached in the past to do limited editions of them but that was not what she wanted. She preferred that her work be produced in enough quantities that anybody who really wanted a piece could buy it and have it. “So if anyone knows a good businessman or woman with an artistic sensibility who wants to further this project, all the legal work is done. So they can have my permission and assistance to do so. Anybody know one?”

Imogen Stuart Stuart was born in Germany and her father was the art critic Bruno E. Werner. She was raised in the Lutheran church but as a young sculptor in Ireland, she became interested in  Irish culture and the country’s religious heritage,and converted to Roman Catholicism. She told the audience in Knock that she had not a bad word to say about the Catholic Church in Ireland or the priests she met, because personally, she found them openly encouraging of her work and eager to help her. That was concretely expressed over the decades by various commissions including a large monument of St Pope John Paul 11 in St. Patrick’s College, Maynooth, the water fonts in the shrine at Knock, and the carved altar in the chapel of University College Cork.

Her works can be seen in chapels and churches across the country but extends well beyond the sacred. Many love her ‘Fiddler of Dooney’ statue, in the Stillorgan shopping centre’s  outdoors mall, which children love to run around. Or her ‘Pangúr Bán’ chair, monk and cat in UCD, which students happily congregated around, evening sitting on the wooden bench. She told Brian she was happy when people felt free to use her art and be close to it and enjoy it.

This was especially true of one of her carvings, namely a  bee-hive cell, along the lines of those on Skellig Michael, ‘though Imogen’s was made out of cedar wood and not the stone that the monks would have used. During the interview she asked if Seamus Kelly was in the audience. He was the principal who oversaw the woodwork by the students in his school in Ballina who helped Imogen finish this beautiful cell. It is a functioning mediation room, with small windows and a bench inside. The cedar wood means it smells almost of incense. Seamus was indeed in the room and he came on stage and spoke about the work on the project and what a privilege it was to be part of it.

The piece, which once featured on RTE’s Late Late Show, has travelled around Ireland, and is now hosted in Kylemore Abbey. Imogen told Brian she wanted to have one in every airport in the world, instead of the nondescript ‘prayer’ rooms that people rarely use. She said the cell was just one way of her expressing her deep love of the monastic tradition that she believes is such a special part of our Irish heritage.

Imogen came to Ireland in 1949, having met her husband Ian Stuart in 1948.  He was son of the author Francis Stuart, who had married Iseult Gonne, daughter of Maud Gonne. A few years earlier, Imogen had begun studying under Otto Hitzberger, who taught her modelling, carving, and relief work using different materials such as bronze, wood, stone, steel, clay and terracotta. Those gathered in Knock were treated photos of her Madonnas, her minimalist stations of the cross, her tortoises, her bronze tree of life, full of Christian symbols and the hands of God coming out of the water and surrounded by a rainbow, “I love the psalms”, she exclaims, on seeing one of her angels, “They are full of hands and wings!”

Brian puts it to her that she has suffered in life, particularly in the early years in Nazi Germany when they had to flee the country. “Nothing matters only love,” she replies. “I have been blessed to be surrounded by love and affection in my life, and from my parents and family”.  Then he goes further, “So what is it like being before God as a 90 year old?”  She laughs. “Well I’m in the firing line!”. The audience laugh. And silently wish her many more years of health and creative artistic work, inspired by her Holy Spirit.

Spirituality conferring a first for Ireland

The death penalty and doctrine, Part 1

Death as the path home

A man deeply in love with God

‘Give the Spirit the mike’

Process evaluation and the apostolic preferences

Death as the path home

Discerning the voice of the Lord

Can God and evil co-exist?