Fr Martin Curry SJ is a member of the Jesuit community in Galway. He took Pat Coyle of Irish Jesuit Communications on a tour of the Jesuit schools and chapel showing her the renovations and developments taking place there.

The interview begins in St Ignatius Church in Sea Rd, Galway which is rarely empty as local people or tourists drop in for a visit.  Martin points out the recently added John Sullivan shrine and the small display cabinet which houses a relic – a large piece of Fr John’s soutane. The shrine is popular according to Martin who recalls one woman whose father received a healing cure through the intercession of Blessed John.

The entire chapel itself has been redecorated and carpeted. Much to the delight of local parishioners the old electric candle stands have been replaced with traditional wax candles, says Martin. He points out other significant features in the church including the hand-painted fleur-de-lys on the ceilings, the hand-carved wooden stations of the cross, and the beautiful mosaic of the Madonna and Child by Louis Le Brocquy.

Not so pretty but important nonetheless is the old church safe which withstood an attempted robbery last Christmas Day, as Martin recalls before taking Pat through the sacristy and out to the adjacent Jesuit secondary school, Coláiste Iognáid. There he shows her the new prayer room for use by teachers and students. Its outstanding feature is a set of new stained glass windows depicting St Ignatius along with scenes from his life and some inspirational quotes from the founder of the Jesuits. The windows are the work of a Serbian woman Marija Kovač for Aria Stained Glass in Co. Galway. 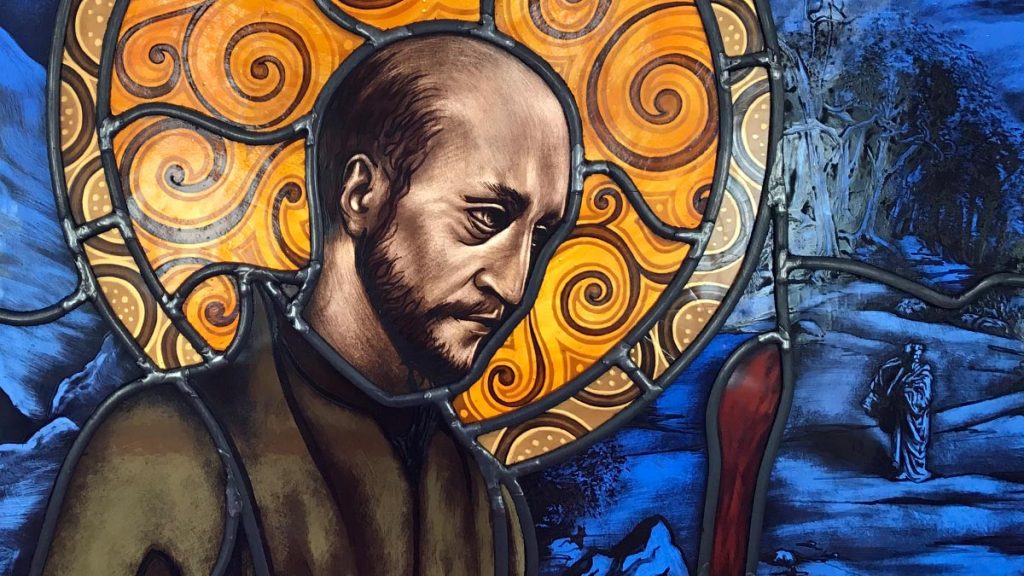 Martin also explains the sporting link between Coláiste Iognáid and Portora Royal School in Enniskillen where Blessed John Sullivan was educated. It was through the rowing club set up in 1934 which is still active in the college to this day as are the links with Portora (now Enniskillen Royal Grammar School).

Their tour finishes outside the Jesuit primary school, next to Coláiste Iognáid, Scoil Iognáid. It’s an all-Irish speaking school which has expanded recently. Martin recalls his own school days there before the primary school was even

Christian faith in the digital age

The Bermingham chalice on show

Problems with the fast fashion industry