On the first anniversary 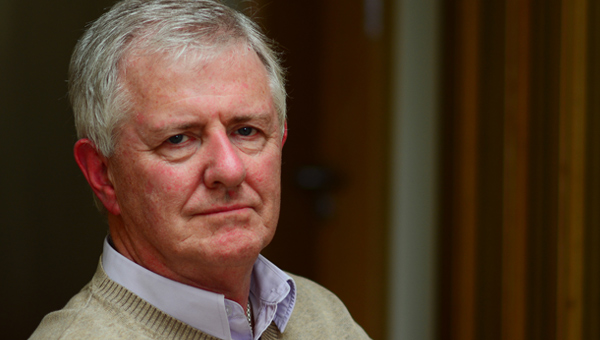 Gerry O’Hanlon SJ is a theologian working in the Jesuit Centre for Faith and Justice. For many years he has called for a more collegial Church, de-centralised from Rome and that gives a voice and real decision-making power to the laity (especially women) and those on the margins. Not surprisingly then he finds much to be hopeful about when looking back over the Pope’s first year in office.He outlines several interesting developments to watch out for in the year to come.

When he first appeared on the balcony of St Peter’s last March he looked somewhat hesitant, almost diffident. By the time he had finished speaking, however, it was clear that something new and exciting was happening. His familiar style of address, his request for prayers, his stress on being Bishop of Rome and his gentle smile all combined to suggest something of great interest was brewing.

And so it has proved to be. We have a pope who makes the church seem attractive, from whose core emanates the good news of mercy and love, the Gospel of Joy, with an instinctive and intelligent reaching out to and from the poor and marginalised. You get a sense that this is not someone who is either afraid of the world or condemnatory only, but who rejoices in the beauty and wonder of life, while not blind to its cruelty and injustice. He does condemn that injustice, while calling those responsible for it to conversion. He has the gift of speaking in graphic images which touch hearts as well as minds, inside the church and way beyond its confines.

What is extraordinary in all this is that he has managed, seemingly effortlessly, to combine the notion of a missionary church, with good news for our world, with that of internal church reform – and show that the two are intrinsically linked. And so, for example, in his remarks about the culture of consumerism and its deadening effects (‘the globalization of indifference’), his analysis moves on to critique the structures of the dominant neo-liberal economic model (with its deficient ‘trickle down’ economic theory) and calls for reform- while, at the same time, instituting reform within the Vatican’s own financial structures, well aware that to call for the former without the latter would be to greatly weaken the force of his argument. And all the time one gets a sense of someone who is in touch with the miseries of the poor (and yet well aware of how much they have to teach the rest of us), of the need for attitudinal and cultural conversion, but also for new structures of economic, social and political accountability.

And, of course, this carries over to his analysis of ecclesial life. He is clear that it has to be more collegial, less monarchical, at all levels, including that of the papacy itself. He leads by example – where he lives, the car he uses, the dress he wears, the people he greets- so that, amazingly, in his humility he has the courage and strong sense of self to take on a centuries old Vatican culture which takes for granted a very different way of doing things. But he is also clear that attitudinal change on its own is insufficient – and so he set up the collegial group of 8 Cardinals (the so-called C8) to help govern the church and, in particular, to reform the Roman Curia, he has invited world-wide consultation on the family (the focus of many disputed areas of teaching in the Church) as part of his aim to make the Synod of Bishops a more dynamic body, he has established a group to examine the issue of clerical child sexual abuse and, as noted already, a new Vatican Council for the Economy with 7 lay expert members among the group of 15, and he has made some important new appointments.

I suggest there are several interesting developments to watch out for over the next while. The first, drawn to our attention very cogently by Mary McAleese in a recent Tablet article (March 8, 2014), is whether his notion of a collegial church will include shared decision-making or just consultation. From his Jesuit background Francis would be familiar with the notion of widespread consultation (although, s he has confessed, he did not himself practise this well enough when Provincial), but also with the juridical right of one person alone to make the decision. A synodical way of proceeding (which he has affirmed) involves not just consultation but also decision making (as, in practice, is very often the case in Jesuit life and, perhaps much more so, in other religious congregations). Can he find the correct structures and institutions to make this a reality, a reality which will survive his own demise?

Secondly, since at the very least he is advocating that consultation be real and not just token and ceremonial, and since he views the lay faithful and in particular the poor as a locus theologicus, a source of theology and teaching, then how will he handle situations where the ‘sense of the faithful’ is clearly at odds with current Catholic teaching? Already one gets a sense that there may be some movement possible on the issue of access to the Eucharist for people who are divorced and remarried, and that, very sensibly, not by way of Papal authority but collegially, by way of the Synod of Bishops, with and under the Bishop of Rome (cum et sub Petro). But what of an issue like the ordination of women, which he has already said is not up for discussion? I simply note here his own words to his fellow bishops that they should listen to everyone ‘…and not simply to those who would tell him what he would like to hear’ (Evangelii Gaudium, 31). Will he have the confidence to trust in the process of discernment – not a populist listening to the loudest voices of course- which may lead the Church into uncomfortable places?

Thirdly, it will be interesting to see if he can follow through on his desire that women should have a more prominent, visible role in Church life, not least in decision making. Again the distinction he makes between ‘sacramental power’ and other forms of power will surely be tested here. I note Cardinal Kasper’s regret that women are not involved in the preparation for the upcoming Synod. I note too that no female economist figures on the list of lay experts chosen for the new Council for the Economy.

Finally, while it is undoubtedly true that the Church can too easily be scapegoated around the issue of sexual abuse and that much progress has been made, it nevertheless remains true that at central level the Church was slow to learn and must surely bear some responsibility for the terrible damage done. Legally the Church tends to fall back on what theologian Gerard Mannion calls a ‘negative subsidiarity’ in this matter, arguing that the Holy Sea has no responsibility for what goes on in local, regional areas. But of course for centuries this same Church has failed to exercise a ‘positive subsidiarity’ by allowing real power to local churches, so that the central administration must bear some moral responsibility at least for failures at local level. One thinks in Ireland of the very mixed messages coming from the Vatican at a time when the Irish Bishops were trying to get their Guidelines passed advising mandatory reporting to civil authorities. And one wonders about the responsibility of the central administration even still to more pro-actively follow up on this issue in parts of the world where seemingly, but improbably, there is little cause for discussion or action.

Francis – and maybe even Brian O’Driscoll, in his own ‘field of play’?!- would be the last to want any cult of celebrity, verging on idolatry. He surely has his own cultural blind-spots and it would be foolish of the rest of us simply to sit back and admire, as if there was nothing for us to do. At the core of his message, the message of Jesus Christ, is that each of us, guided by the Holy Spirit, has a unique role to play – in life and, for the baptized, in the Church. We can surely be grateful for this wonderful moment of opportunity, and to Francis for providing it. Now let’s use it, let’s go through the door that has opened, and let’s make our own contribution which, with the Spirit’s help will involve dialogue, sometimes confrontation, and always greater richness.

Welcome prophet for the poor