Who Is Jorge Mario Bergoglio? 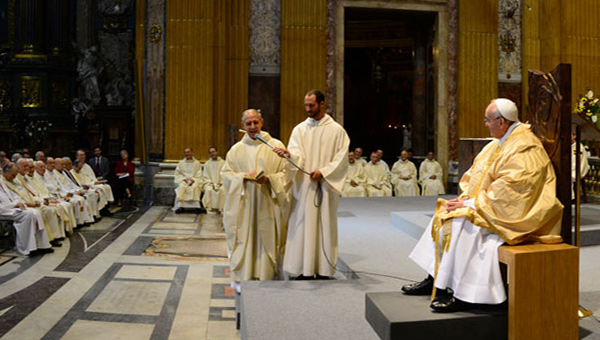 In the realm of religious news at least, there can have been few journalistic coups to match that of Antonio Spadaro SJ getting a ground-breaking interview with the Pope two weeks ago. The venture was on behalf of two Jesuit publications, Civiltà Cattolica and America Magazine, and through them on behalf of a dozen more Jesuit journals worldwide, including Ireland’s Studies. Read the full interview on Jesuit.ie.

It all began with an impulsive suggestion by James Martin SJ of America Magazine. According to America editor, Matt Malone SJ, he and Fr Martin were reviewing the magazine’s coverage of the new pope when Fr Martin said “Why don’t we try to interview the pope?” “I gave it three seconds of thought,” Fr Malone says, “and said, ‘Yes, why not?'”

In The story behind the story, Fr Malone describes the comings and goings from that moment which eventually led to the interview. And what an interview it turned out to be! Fr Spadaro’s opening question was: “Who is Jorge Mario Bergoglio?”, and while the Pope’s response was pithy and striking – “I am a sinner. This is the most accurate definition. It is not a figure of speech, a literary genre. I am a sinner” – in truth, there was much to learn about who the Pope is from his answers to all of Fr Spadaro’s other questions. He is evidently a humble man, a man who puts the dignity of people first, a man who is self-reflective and self-critical, a man who is not afraid to speak from the heart – without ever, of course, betraying the head.

First things first, the Pope is saying. “I see clearly,” he comments, “that the thing the church needs most today is the ability to heal wounds and to warm the hearts of the faithful; it needs nearness, proximity. I see the church as a field hospital after battle. It is useless to ask a seriously injured person if he has high cholesterol and about the level of his blood sugars! You have to heal his wounds. Then we can talk about everything else. Heal the wounds, heal the wounds…. And you have to start from the ground up.”

The impact of the interview has been immense. It was covered by all major media throughout the world, and it hugely impressed a great number of people. Some days later, Fr Spadaro made known by email that he had got a call from Pope Francis. “He is grateful to all of us,” he wrote. “He is also perfectly aware about the reaction of the newspapers around the world… He is also aware about the many stories of conversions and getting back to the Church which are the fruits of this interview… I got more than 1,000 messages!”

In the Autumn 2013 issue of Irish Jesuit review Studies, the text of the interview will be published, along with an analysis of its implications by Gerry O’Hanlon SJ.