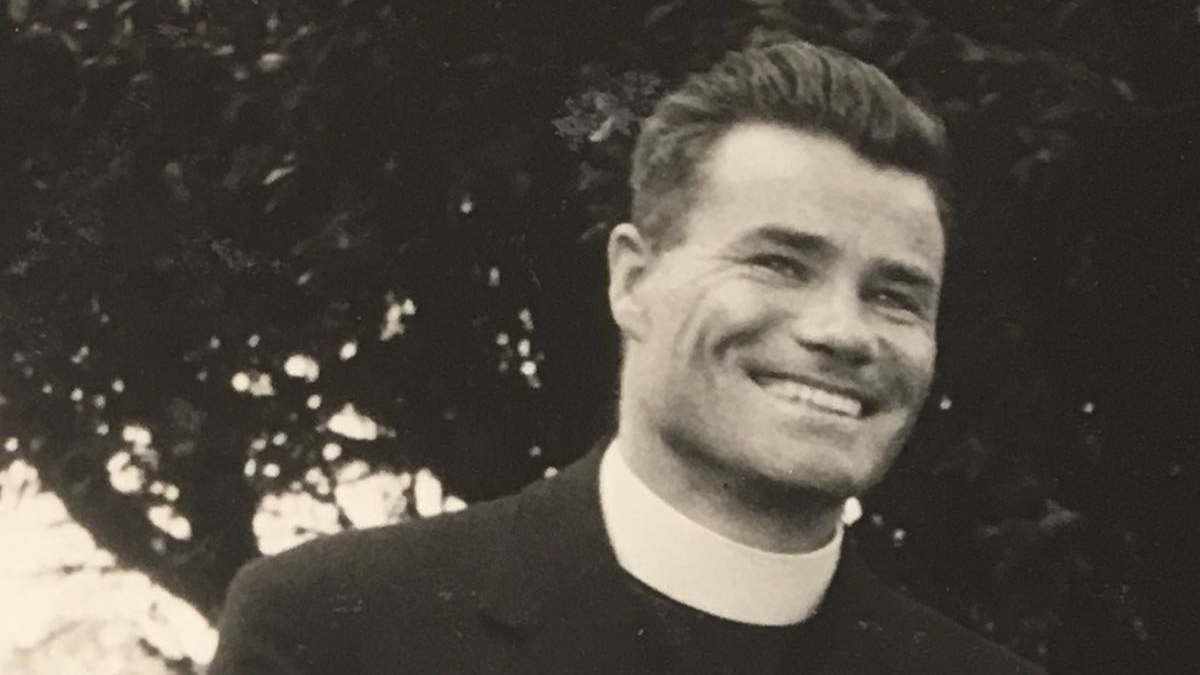 Irish Jesuit Fr Liam Browne SJ died peacefully at Cherryfield Lodge nursing home, Dublin on 26 October 2017 aged 88 years. His funeral took place on 31 October at Milltown Park, Ranelagh followed by burial in Glasnevin Cemetery. The Dubliner spent much of his early priestly life on various missions in Zambia, before returning home to work at various places in Ireland in 1974. Below find the homily at his funeral mass given by Fr John K. Guiney SJ.

We remember and celebrate a long and eventful life of Liam Browne.

He was born in the Rotunda on 18th August 1929 and brought up in Kilmainham Dublin, went to CBS James’s St… and entered the Jesuits at Emo Park on 7th September 1946, was ordained in Milltown Park on 28th July 1960, and took his final vows at Chikuni in Zambia on 2nd February 1964.

Four of the 12 companions who took first vows with him in Emo are with us still: John Guiney, John Dooley, and Jim Smyth… MJ Kelly who is living in Lusaka, Zambia.

To say Liam had a rich,varied and eventful life is an understatement. He worked in Zambia, Ballyfermot and Cherry Orchard, was Chaplain in St Vincent’s Hospital and Marlay Nursing Home and all through was constant in his research on the Chitonga language and culture. He went to God peacefully in Cherryfield Lodge last Thursday at 4pm.

A common theme of Liam’s life was his desire and wish to be close to ordinary people and to understand their cultures and ways of life. In an interview with the Irish Jesuit Mission Office he expressed his desire to become a Jesuit and priest in this way: “to help people and to enable them to experience Christ’s forgiveness and he noted the great influence on his vocation of his grandmother Susan Waldron.

When Liam arrived in Zambia in 1954 he plunged himself into learning the local language Chitonga in the diocese of Monze. He was not only interested in learning a language but set about researching the culture of the people, looking at what makes them tick – trying to understand seeing how culture/religion/faith are interelated.

His work in the study and preservtion of Tonga culture was similar to the work of another renowned student of Tonga cutlure – Frank Wafer who founded the Mukanzubo Kalinda Cultural Centre in Chikuni. They did so much to record, store and document traditional proverbs, dance, songs, customs and rites of the community. Liam did what every effective missionary does; he fell in love with the people he was called to serve – the Tonga people and culture.

Liam was the go to person for scholastics/young volunteers, learning the language and entering a new culture. He was the person to induct them into Tongaland. Colm Brophy as a scholastic in Zambia in 1969 recounts: “I was anxious to acquire a knowledge of Chitonga. So I asked the Provincial, John Counihan, to send me to a place and to a person who could help me do that.

“In 1969 I was posted to Chilala-Ntaambo (‘the sleeping place of the lion’), a metropolis of remoteness… because I knew it was remote and that I would be living with a man who was very fluent in the language – Liam Browne.”

Liam, he remembers, would spend a lot of his time researching the Chitonga language and culture. He would go around various villages with his tape-recorder interviewing mainly elderly people.

Chilala-Ntaambo was frontier missionary land in the 1960s.

It wasn’t an easy life for Liam there as parish priest. There was no solid Catholic community. The place was new. For Sunday Mass only eight or ten people would turn up mainly from two families. He was ploughing a lone furrow.

Liam continued to work in missionary frontiers in the Fumbo and Chivuna parishes and in 1973 took a break to study cultural anthropolgy in Campion Hall, Oxford under the guidance of the renowned Professor Evans Pritchard.

Liam then published some of his research on the initiation rites of the Tonga people but fell foul of at least one influential Tonga political leader who felt that secrets of their culture was not for public reading. He was not allowed to renter the country.

Two years ago while visiting Monze I met his mentor and friend in Zambia – the great cultural anthropologist of the Tonga people Barbara Colson who worked with Liam.

She was full of admiration for the work and research of Liam and admitted that Liam’s kind of research is now prescribed reading for students of the Tonga culture in every African library. A real joy for Liam in latter years was The Tonga-English Dictionary that Liam had started in the 60s and was finally completed and published by Frank Wafer just 3 years ago.

Liam returned to Ireland in 1974 and from then to 1989 he went to work in Ballyfermot and began to build firstly a temporary and then a permanent Church with the people and with the able assistance of the Daughters of Charity and especailly Sr Cabrini.

His friends in Cherry Orchard still remember him as a man of great kindness and compassion. They remember his outreach to the most needy, his wisdom in counselling people and also his ability to plan, budget and look ahead even when the share budget of the diocese was small. Amongst Liam’s talents was wood work and he loved making things; much of the design and wooden fixtures and paintings were done by Liam in the Churches he built.

Those who knew Liam in Zambia and Ireland remember him as good-humoured, generous and who loved music especially jazz.

His friends also remember Liam as a man who shot from the hip, spoke his mind with a bluntness that could put people off. He had a certain distrust of superiors and people in authority, sometimes with well founded reasons. However, once he had got it out of his system, he got on with things and remained on good terms with all whom he encountered.

Pehaps the phrase ‘he got on with things’ sums up the greatest characeristic of Liam’s life. Liam was a man always available for mission and when the mission he really loved, Zambia was sudenly interrupted – it must have been a heartbreak for him, but he moved on without complaining to the new missions on the home front.

At the end of his life Liam shared with his friends. I am glad I did what I did when I could. He had few regrets. Once he decided that Cherryfield Lodge nursing home was the best, he moved and had the highest regard to all who cared for him there.

He was indeed always ready for a change and recognised in the wisdom of the ancestors that there is a time and a season for all things under the sun. On Thursday last a final time had come; he surrendered in peace to his maker in the presence of his sister Monica.

Finally, a word of thanks to two great missionary families: the Browne’s and the Cassidy’s. Liam’s niece Susan shared with me that as a child she saved up her pocket money for the missions. Monica helped out Tommy Martin for years with cake sales and raffles for the missions and coincidentally two weeks ago we got a letter from a Zambian PP, from that very parish that Liam founded 50 years ago with the help of his family and friends saying hello to Liam.

My name is Fr. Kenan Chibawe, parish priest of St. Francis Xavier parish in Chilalantambo, Monze in Zambia. Our parish was officially opened in 1967 by Fr Liam Browne. This year on 28th October, we are celebrating 50 years or Golden Jubilee of the growth of the Catholic faith that was planted by the Jesuit missionaries in particular Fr Brown and the Late Fr Norman McDonald SJ. We would have loved to see Liam here but maybe his age may not allow him to travel. People still remember these priests in our parish.

We too remember and celebrate Liam’s life with the people of Zambia, Cherry Orchard, his former colleagues alive and dead in the Vincent’s and Marlay chaplaincies. We pray for and with Liam in his adopted language Chitonga:

Clocking up kilometres for Zambia

Victim of its own success

The changing face of missionary life. Joe Hayes SJ on his time in Zambia.

Into the Zambian groove