In collaboration with the Zambia-Malawi Province, Padraig Swan, Director of Faith and Service Programmes at Belvedere College SJ, travelled to Chikuni, Zambia with Kevin Reynolds, a radio producer in RTE and professional photographer PL Curran, in June 2019. The purpose of their visit was to begin the preservation process of over 500 tapes depicting Tonga culture, music and folklore. Padraig provides the following report for Irish Jesuit Communications.

Frank Wafer SJ is an Irish Jesuit missionary who has worked in Zambia for most of his life. From early on in his missionary activity with the Tonga tribe in the region of Chikuni in the Diocese of Monze, Zambia, Frank realised that the Tonga music, culture, song, dance and folklore needed to be promoted and preserved or it would be threatened by the increase of English and ‘Western’ culture. He therefore spent much of his priestly life writing dictionaries in English and Tonga and recording Tonga tribal music and promoting Tonga liturgical music for use in religious liturgies. His liturgical music is still in use today. Frank also established the Mukanzubo Institute and Museum in Chikuni for the promotion of Tonga culture, music and dance for the next generation.

The work of preserving Fr Frank Wafer’s legacy and archives:

Frank is no longer active in his ministry in Chikuni and he now spends his days in the Jesuit retirement community of John Chula House in Lusaka, Zambia. He receives medical attention there for memory loss, but is otherwise in good health.

In June 2019, with the collaboration of the now Director of the Mukanzubo Institute in Chikuni, Fr Andrew Lesniara SJ, and Fr Provincial of the Zambia-Malawi Province Leonard Chiti SJ, a group of 3 persons from Ireland travelled to Chikuni to commence the work of preserving the myriad of recordings made by Frank. In all there are 343 ‘reel to reel’ tapes and 201 cassette tapes of various recordings. The three from Ireland were Kevin Reynolds, a radio producer with RTE; PL Curran, a professional photographer; and Padraig Swan from Belvedere College SJ. Padraig has been visiting Chikuni and Mukanzubo for many years and responded to an ongoing request to help preserve the recordings that were stored in a metal filing cabinet and in danger of deteriorating. There was a certain sense of urgency about this project.

Connections were made with Boston College SJ (BC) in the US, and specifically the Burns library at BC, where the Frank Wafer archive material from the Tonga tribe could be preserved through digitisation and all files uploaded to a dedicated website explaining the context and background to the Tonga culture, music, folklore and the many recordings available. Making this material available to a wider audience of ethnomusicologists, researchers, music and art students, not to mention the Zambia-Malawi Jesuit Province and the Tonga tribe, is deemed a most important task, creating an invaluable resource for future generations.

Below, a group of traditional Tonga dancers are dressed in traditional costume at Mukanzubo Institute. 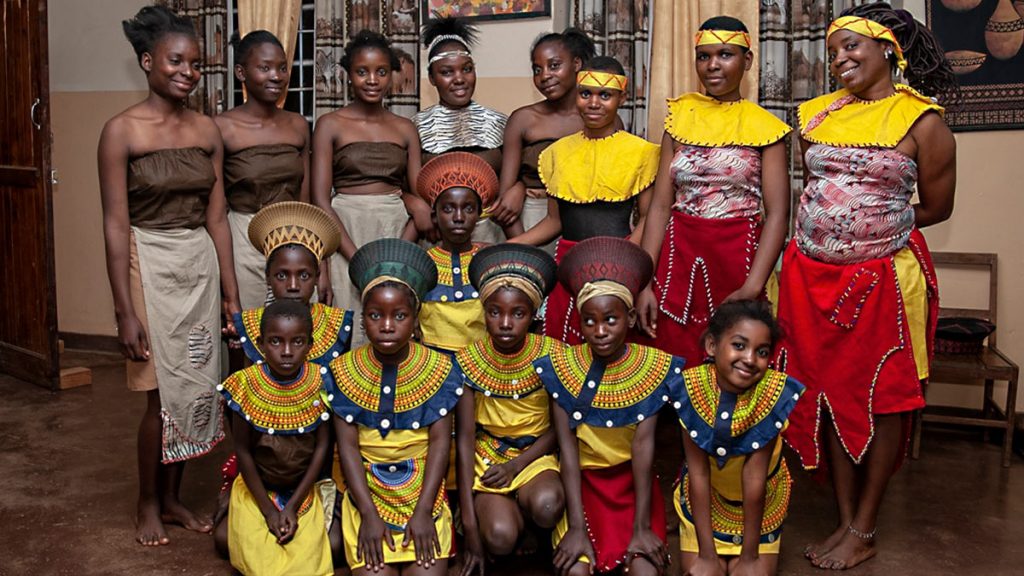 The process of preserving the recordings

The process of preserving the recordings was to first create a catalogue of what recordings were there and to index them with details such as numbering each tape, describing the box, writing a note of the description on the box, the condition of the tape, the size etc. Each tape and associated notes were also photographed. This process took a number of days and was ably assisted by Yvonne Ndala and Mabel Chombe from the Mukanzubo Institute. The final result is most likely the only comprehensive record of all the recordings made by Fr Frank. In itself this was a mammoth task.

A sample of 17 tapes were taken back from Zambia to Ireland and handed over to Boston College at a meeting in Boston College Ireland on July 18th 2019. These 17 tapes will be digitised by University College Dublin (UCD) by Sept 2019 and the process of digitisation will note the ease of digitisation and any quality issues with the tapes. From this initial sample the digital recordings will be listened to by Yvonne and Mabel in Chikuni and others with knowledge of the material and the description of the content will be verified. Assuming the digitisation process is successful, an assessment of all the material will be made to determine the historical value of the various recordings and a plan to digitise all remaining tapes or those deemed most valuable.

Based on the 17 samples, the cost of digitisation will be scaled up for what’s involved in digitising all tapes deemed important and funding sought to fulfil this objective. Once complete the digital versions of the recordings will have the content verified and the process of creating the dedicated website will commence. It is acknowledged that this overall process may take a number of years to complete but at least once the material is digitised it is saved from possible disintegration.

The many faces of crime

The one who sings

‘Shared dream for a better world’

Over 100 students sleep out for the homeless

Nationalism and the Christian call to solidarity

‘Bohemian Rhapsody’: a reflection on the movements