‘Talking the walk’ in Drongen 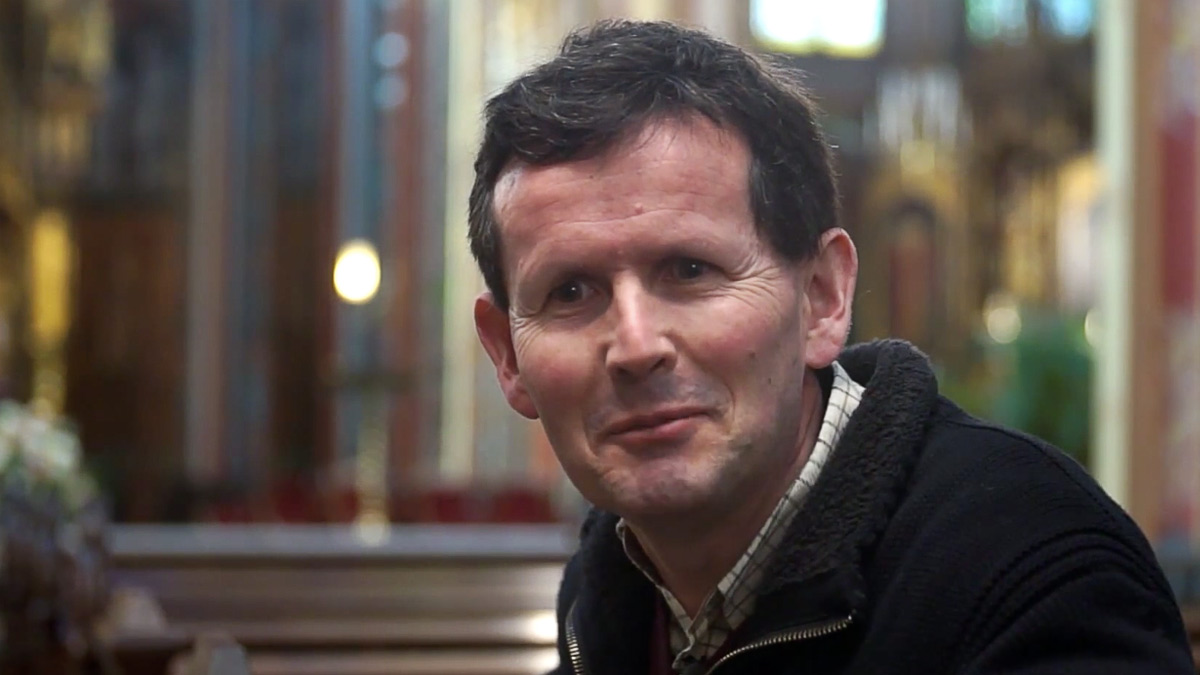 Jesuits and colleagues from Ireland, Britain and the Low Countries took part in a three-day media training workshop in Drongen, Belgium, organised by the Inter-Provincial Communications Group. The trainees were from a number of apostolates across Europe including the Jesuit Refugee Service, Education, Social Justice and Communications and all agreed that the course, which ran from Wednesday 13 June -Friday 15 June, was a great opportunity to meet up with colleagues from different countries, get to know one another, put faces to names, and trade stories and experiences.

The course kicked off with a power point presentation by digital Chaplain Nikolaas Sintobin SJ (pictured here) who runs the Seeingmore website. He spoke about communicating truth in the digital age. The two criteria for truth in this age he contended, is that it must have a personal or relational dimension. And it requires trust as a key feature of the relationship between the producer and the consumer.

Outlining certain characteristics of the digital environment he noted that digital communication is not hierarchical, it offers the possibility of personal interaction in an ocean of anonymity, and the surfer is the boss, wanting to add to his or her own search for truth.

He then examined the communications techniques of Pope Francis, contending that he is a natural fit in the way he communicates, for those searching for truth in the digital age. He said the Pope loves people and shows it. He’s authentic in that he does what he says. He’s inclusive in his approach, and has a sense of humour. Critically also, people trust him.

Ruth Morris, Digital Communications Editor in the British Province made a presentation on Thursday. She spoke about a training course she’s completing with Google on digital skills and leadership. The key take away from the course for her was the shift being made by businesses away from the ‘how’ and the ‘what’ of  doing things to the ‘why’ are we doing what we are doing? Today’s leaders in a variety of fields are returning to the ‘why’ question after many years when the emphasis was primarily on getting things done, she explained.

Apart from the talks, including one from Jane Hellings, Director of Development and Communications in the British Province, on GDPR, the new EU data protection legislation, participants had signed up for a variety of workshops on both traditional and social media.

Pat Coyle, Director of Irish Jesuit Communications and former journalist with RTE, BBC and Channel 4, presented two different workshops. One was on ‘Getting Inside the Mind of  Journalist’, where participants learnt the ingredients for what makes a story newsworthy and how to write a press release or story for the web. Her follow-up workshop, ‘Talking the Walk’, involved attendees doing an  audio interview with her on the story they had procured for their press-release. The interviews were then critiqued and whilst tough to go through, feedback and the level of laughter coming from the workshop room, suggested it was an “enjoyable if gruelling training experience,” as one of the trainees put it!

Stephen Noone, SJ, who had worked in the political arena in Scotland before joining the Jesuits, gave a workshop on the language we use in our public communications. He got people to explore whether they were really cognisant of the people they were talking to and the language they used in doing so, urging them to ask ‘are we really just talking to ourselves?’ And ‘how can we really reach people?’

Ruth Morris gave a workshop on how to take good digital photographs, and sent participants out and around the grounds of the retreat centre in Drongen to put their leaning into practice. Whilst Rick Timmermans gave lots of helpful tips for people who have Facebook pages and want to use the FB Live video option which FB promotes with gusto. He demonstrated simple devices that could be used to take better quality videos on phone or iPad, including a little tripod stand and an extendable small microphone.

Sim D’Hertefelt ran a workshop on not just writing blog posts but driving traffic to them once their published online. And Jos Moon SJ helped attendees engage better with their audiences when writing for both web and print media.

Feedback from the plenary session on Friday indicated that those who came really enjoyed and benefited from not just the training but  from the break away. The generous hospitality of the Drongen Jesuit retreat centre staff was much appreciated. The evening social with the great Belgian beer was the perfect end to the days of intense but worthwhile training, all agreed.

How to make good decisions

Pope Benedict and the abuse scandals

A spirituality of failure

The importance of laughter

What God are you praying to?

A radiance in dying?

On being close to the dead