‘Tattoos of the heart’ 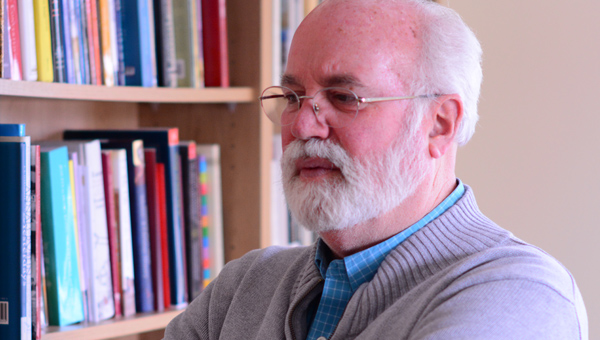 Greg Boyle SJ is author of a book described as ‘jawdropping’. Not surprising since Tattoos of the Heart tells the gripping story of his work over the last thirty years with gangs from the most notorious gangland area of Los Angeles. He was in Ireland recently where he enthralled audiences in Belfast and Dublin, and listeners to national and local radio. He spoke about his journey with hardened criminals who became upright citizens with more than a little help from Greg and his volunteers who set up ‘Homeboy Industries’. You can listen here to an interview he gave to Pat Coyle of Jesuit Communications, covering the main narrative of the book.

When Greg Boyle returned from missionary work in Latin America he asked to be sent to a poor parish but he didn’t expect to be sent to Dolores Mission, the poorest Catholic parish in Los Angeles. It was torn apart by gangs who regularly shot each other having little to expect from life by way of either education or employment, according to Greg. So he decided the first thing he would do would be to set up a special school for the violent and disaffected young gang members. They said they would come without weapons and learn without fighting and after a shaky start with volunteer teachers the school took off.

But Fr Greg knew that education alone wasn’t enough. These young men needed work and a sense of dignity. That wasn’t easy to come by given the track record of most of them and local businesses were reluctant to give them a start. So just as he’d set up the school, Greg decided he would create work for them and pay them to do it. He enlisted the help again of parish members and families along with some willing benefactors. One wealthy man bought a disused bakery in the parish and the first venture began and ‘Homeboy Industries’ was up and running.

The project blossomed and two rival gangs came together to build a local play school, ably assisted by skilled volunteer workers. Soon cafes were opened around Los Angeles, staffed by former gang members, some of them female. Strict rules were placed on those participating in the programmes, no weapons, no fighting, no using or peddling of drugs, no graffiti!

As the word spread more and more gang members started coming for help and, according to Fr Greg, ‘teaching me all the spiritual lessons I needed to learn: gratitude, humility and a real love of the poor, like Jesus had”.

One day a young man just out of prison came to talk to him. He was really frustrated because he just could not get a job, even though he had attended numerous interviews. ‘It wasn’t hard to see what his problem was,” says Greg with a wry smile. “He had a tattoo right across his forehead saying, F**k the world!” The tattoo had to go and so Greg started another wonderful service of tattoo removal for those gang members who wanted to start over with a clean slate and a clean body. Greg enlisted the help of volunteer dermatologists and plastic surgeons who now nearly thirty years later have removed thousands upon thousands of tattoos.

Greg Boyle SJ is an inspiring Jesuit. Since his work with gangs began all those years ago, Los Angeles has seen a dramatic drop in gangland related deaths and crime. Thousands of young people have benefited from the ‘Homeboy Industries’ and the tattoo removal service. According to Greg, he has received much more than he has given. His life was often in danger in the early days as he stood on the street talking to gang members. “Suddenly a car would drive by and rival gang members would open up fire. Every time this happened the boys I was with threw me to the ground and spread their bodies over me to protect me. They had nothing to live for and death counted as little, but they wanted to look after me.”

A gifted speaker, he now spends a lot of his time giving public talks and spreading a message of hope and compassion. He is adamant that we are privileged to serve the poorest and weakest in society, as is the call of the Gospel. He says we have to listen to what they have to teach us. ” I have met wounded and damaged people who never had a chance and when they got that chance they rose to the occasion and made a life for themselves and their families. I have never met an evil gang member”

Tattoos of the Heart is published by Simon and Schuster and Fr Greg is currently working on a follow up book.

Denied their right to childhood