Vigils of hope for kidnapped Jesuit 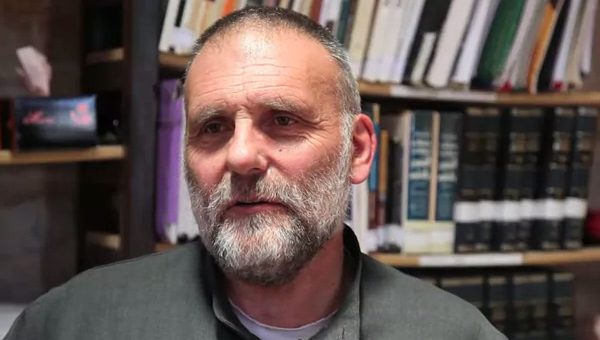 It is six months since this newsletter reported the disappearance of Italian Jesuit Paolo Dall’Oglio on a peace mission in Syria. Since then, despite conflicting rumours, there has been no ransom demand nor any reliable information about whether he is alive or dead. However, prayer vigils and solidarity gatherings are taking place all over the world on Wednesday 29 January to mark the six-month anniversary of his disappearance. Paolo had worked for over thirty years in Syria before being exiled by the Syrian regime in 2012. He vanished on a return illegal visit to the country to help and encourage peacebuilding efforts between Christians and Muslims. His current whereabout and conditions are unknown.

The 59 year old Italian Jesuit priest had been living for three decades in Syria, where he founded the monastic community of Deir Mar Musa, located in the desert north of Damascus. Paolo and his community were dedicated to dialogue between Christians and Muslims.

Sadly, Paolo is one of many thousands of people detained in Syria (by the regime and other armed groups), some of whom have undergone torture and even death. All these people are being remembered in a special way on 29th January 2014, the 6-month anniversary of Paolo’s disappearance.

In solidarity with other vigils being conducted in Beirut, Rome, Paris, Brussels, Geneva people are being asked to pray for Fr. Paolo and all others currently detained in Syria.

Mary Wakefield is deputy editor of The Spectator magazine and she met Paolo. She beleives he’s still alive and  here’s what she wrote of him in a recent article (Jan 18th)

“Perhaps it’s odd to single out one man, but you take good news where you find it in Syria, and Fr Paolo might be unique. If anyone has a cat’s chance in hell of rallying the right rebels in a post-Assad Syria, it could well be him.Fr Paolo’s an Italian Jesuit of sixty-odd who fell in love with Syria as a teenager and went back there with a vocation, he said, to promote peace between Muslims and Christians. He’s been there three decades now, debating the nature of God with Sunnis, Christians, Shia and Alawites, and teaching that Christians shouldn’t just tolerate Muslims but love them. He’s spoken of with respect throughout the country. ‘Abouna Paolo’, they call him, and when I visited Syria eight years ago, all manner of otherwise pretty taciturn types smiled at the mention of his name.

When the war broke out, many Christians fled. Sensible of them, really, because more often than not they were seen to as allies of Assad and once he lost his absolute grip, they were vulnerable. Fr Paolo stayed put. He’s a wily as well as a holy man, and he used his understanding of the various sects to mediate between warring groups. He marched with the Free Syrian Army, negotiated for the release of prisoners, lobbied on behalf of the Kurds. Wherever real trouble broke out, Paolo was drawn towards it — sure that he could talk down even rabid jihadis. You might remember a to-do about Christians being hounded out of a town called Qusair. Well, there was Fr Paolo in the thick of it, negotiating with both sides and praying and fasting for peace.
FlashI met Fr Paolo only once, in the desert monastery he restored just north of Damascus. He’s a formidable chap, charismatic and vast with a great boulder of a head, so at first I laid low and listened. As darkness fell over the desert, young Muslims and Christians gathered round him and debated the nature of Christ.

The next day, feeling braver, I asked Fr Paolo whether he thought Islam or Christianity better. He grinned and said (my diary says): ‘I don’t compare. I have great respect for Islam, but all I know is my experience. I learnt about Jesus Christ, I walked with him and I discovered his divinity.’ I was surprised at the time, expecting this famous Islamophile to say that any path will do, but Paolo’s faith is what Syrians respect. In a region united by belief, only relativism is really suspect.

It was in the spring of last year that things really began to go badly awry in the north of Syria. A loose alliance of rebels took the city of Raqqa on the northern bank of the Euphrates, but as the Syrian Sunnis were celebrating, the foreign Islamists began to paint the town black. Soon, churches were ransacked and the ISIS flag raised above them. Before long, impromptu sharia courts appeared and those blood-hungry ‘lions’ of ISIS began their usual routine: executions, beheadings and torture.

Who dares brave Raqqa? Fr Paolo, of course. In late summer he smuggled himself into town with the help of Kurdish fighters and went to try to talk peace to ISIS. This isn’t quite — quite — as crazy as it sounds: there’s a stream of politics running through any sectarian bloodbath and Paolo went in part to talk to the local bigwig who has the ear of the rich Saudis who (bless their hearts) sponsor ISIS in Syria and Iraq.

It didn’t pay off for Paolo this time. The last footage of him is on Youtube, at a rally in Raqqa — his big head high above the crowd, rallying the crowd, calling for peace. A few days after that he disappeared, bundled into an ISIS prison, and since then: silence. Some have it that he’s being held near the Assad dam, others assume he’s dead — but I think not. He’s too important a bargaining chip and ISIS knows his worth. Another great Jesuit, Pope Francis, said a prayer for Paolo’s safety on the feast of St Ignatius Loyola last year — and in many things they are as one: Francis shocked the world by washing a Muslim’s feet last Easter and Paolo shares the Pope’s passion for the poor.

Even if the Pope can save Paolo, he has no chance of keeping him out of Syria. The troublesome priest will stay put — and perhaps this face-to-face with ISIS is somehow the culmination of his vocation. At any rate, when next week all the talking heads are in despair about ISIS, keep in your mind that, in a prison cell somewhere in the desert, there’s every chance Fr Paolo will be conducting his own peace process.”

And the following message comes from the Al Khalil Community of which he was a part.

“God is my light, my salvation, so what should I fear ?” (psalm 27, hymn of the light of the morning prayer)

On Wednesday, January 29th, it will be 6 months that Paolo Dall’Oglio, founder of our community, has been kidnapped and is detained somewhere in Syria. We are like one of these many Syrian or Iraqi families who suffer from a relative’s disappearance.

Gatherings and prayers will be held in various cities on this day, to say that we do not forget him, to say “freedom for Paolo, freedom for all the detained in Syria”. We will show portraits of Paolo and others detained, read extracts of his texts and share hope to see him soon with us. The spirit of this event is human and spiritual rather than political.

Here are the gatherings scheduled until now :

– Beirut (not yet fully confirmed): square of Church Saint Joseph, Ashrafie, at 18h

– Qatar: place to be determined

Tell friends you have in these places and call the press if you feel it is relevant.

To contact the local organizers or to suggest other places, please answer this email.

We shall never lose hope