With Christ in Service 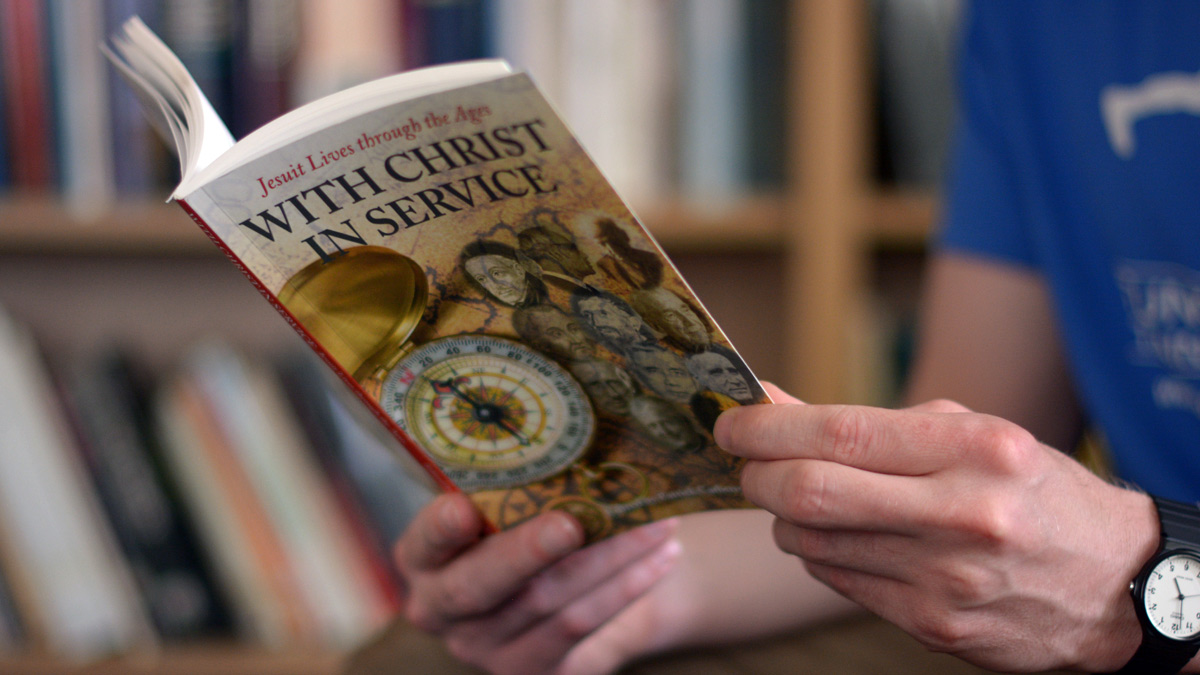 Published by the Messenger Publications, With Christ in Service is a book about the lives of inspirational Jesuits through the ages. It is written by Jesuits of today and is edited by Patrick Carberry SJ, Commissioning Editor for the Messenger Publications. There’s an interesting observation in the synopsis, “It is a remarkable fact that St Ignatius, in writing the Constitutions of the Society of Jesus, never specifies what the Jesuits are meant to do”. This publication encapsulates some of the responses Jesuits have made in their times and circumstances. Fr Leonard Moloney SJ, Provincial of the Irish Jesuits, writes in the foreword: “We need to work alongside generous people – whether lay, religious or priests – in a real sharing partnership.”

In part one of the book, the beginnings of the Society of Jesus, Fr Carberry notes the founder’s growth in discerning God’s will. “Ignatius [Loyola] was in his mid-thirties when he enrolled in a class of young boys studying Latin. He found himself frequently drawn away from the boring lessons by lofty spiritual thoughts and moving insights. He came to the conclusion that if God wanted him to study Latin, such distractions, despite their appearance, could not also be from God. Acting on this moment of discernment, he approached his teacher, promising never to let his attention wander in this way again. From then on the temptations ceased.”

We also learn that Ignatius’s path was far from straight: “Over and over again, as if entering unknown terrain, the pilgrim had to change his plans, make adjustments, accept disappointments and failures, struggle with opposition and misunderstanding and set himself new courses”.

Part two of the book focuses on 7 Jesuits who were sent on mission. David Stewart SJ follows the life of Claude de la Colombière: “It is largely through the example and inspiration of Claude la Colombière that the devotion [to the Sacred Heart] was entrusted in a special way to the Jesuits,” he says, “Over the years, it has taken on many forms, including the international prayer movement, the Apostleship of Prayer, now known as the Pope’s Worldwide Prayer Network”.

In his chapter on the French Jesuit Teilhard de Chardin, John Ayotte SJ says: “My bet is that, when theologians come together in the not-too-distant future, they will speak of this humble man, who dug the soils of France and China and foresaw a world becoming Christ, as the doctor of the twentieth century who shaped the future of our thought”.

Irish Jesuit Kevin O’Higgins writes about the peace activist and writer Daniel Berrigan who died not so long ago. Kevin had personal experience of the internationally renowned Jesuit: “Meeting him, as I was privileged to do on several occasions, he invariably came across as gentle, soft-spoken and intelligent. But this sensitive side of his personality could not mask a steely determination to do whatever he believed was necessary in order to live his life in harmony with his Christian faith and the demands of his Jesuit vocation”.

Part three explores the lives of 8 Jesuits who went ‘To the ends of the earth’ in order to practice their deep rooted faith. Philip Fogarty SJ writes an account of the great missionary Francis Xavier. He focuses on the saint’s interior movements toward God. In reference to Francis departing from his friends Ignatius and Pierre Favre, at university [Collège Sainte-Barbe] in Paris, he writes, “Slowly, over the years, he had grown close to the two of them, and would now miss them. Sadness entered his heart, as well as something akin to envy. He wondered why he felt so discontented, and then he realised the reason; his ambitions, which he had nurtured for many years, did not truly satisfy his heart”.

The life of Salvadoran Jesuit Rutilio Grande is written by Michael O’Sullivan SJ. He outlines the importance of liberation theology in the context in which Grande lived and worked : “In Latin America, the growing awareness of the plight of the poor was understood theologically as a sign that God was calling and guiding his people to respond to their historical situation”. About the Jesuit Martyr of El Salvador, Fr O’Sullivan says: “Let us never forget Rutilio and his courageous faith, hope and love. And let us be inspired by him to play our part in standing up for and with those whose struggle for faith and justice reflects God’s dream for the world”.

With Christ in Service also includes biographical information about the 13 Jesuit contributors, whose own stories point to the diverse responses that Jesuits make in our time.

‘What does it all mean?’

Biography of a Jesuit-educated judge

Christian faith in the digital age

The mission and vocation of being a catechist

Pope Video: Church on the Way