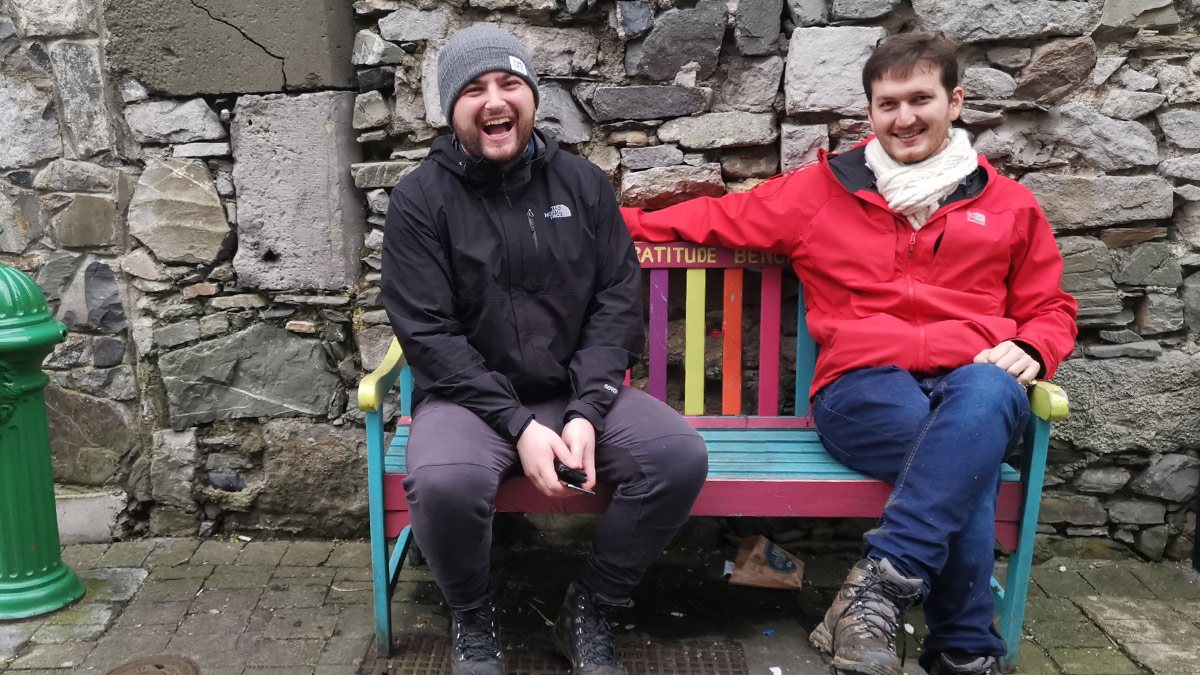 Every second Sunday, in Leinster Rd in the heart of Rathmines, an Ignatian-orientated Mass takes place. The Mass is organised by the recently-formed community of young men known as the Faber Companions, and the celebrant is Fr Myles O’Reilly SJ.

The community is named after Peter Faber SJ, an early companion of St Ignatius of Loyola, the founder of the Jesuits.  And quite like Peter Faber, these young men seek to embody a living and breathing version of Ignatian spirituality. They are committed to growing in faith and prayer, both collectively and individually. The four pillars underpinning their way of life are spirituality, service, sacramentality, and community living.

The Mass is celebrated in their community home in 28 Leinster Rd (where the Jesuits used to have a House for Scholastics) at 6.30pm. They  are joined by some 20-25 friends, acquaintances, and strangers for what community member James Aherne describes as a “thought-provoking and simple service which is followed by refreshments and open discussion.”

The Mass has been continuously growing since 2018 and is open to all. Dan Broderick, 25, is also a member of the Faber group. He says that after leaving university he had a myriad of new challenges to contend with. “Entering the working world, navigating a healthy relationship with income, and managing a newfound independence was part and parcel of this process,” he says, adding that “the Faber Companions has been my bedrock for faith and community throughout this new season.”

Each Faber companion takes a turn for a week at a time in leading morning community prayer on Mondays, Wednesdays and Fridays and in leading their communal Examen prayer on Tuesday and Thursday evenings. Each companion also has a spiritual accompanier or director. As community members, they are all involved with groups that are addressing social disadvantage in Irish society.

According to Myles O’Reilly SJ, a central figure in setting up the Faber Companions, the seven community members are like St Peter Faber and the early companions of St Ignatius in that they “seek to find what is God’s will for them, and to grow individually and collectively into a living embodiment of Ignatian spirituality that they can share with others of their own generation.”

He says the community members do this in a variety of ways. Along with the fortnightly Mass for young adults, they also work with pastoral teams in Jesuit schools and assist parishes on retreat programs, with a view to evolving best-practice retreats for each class. Another feature of their lives is the evening events which they host in their house to assist the faith and prayer life of guest participants.

The Faber Companions participate in pilgrimage retreats to Loyola and Manresa in Spain during Holy Week, and they develop and support pilgrimage retreats during the summer with Brendan McManus SJ and Eddie Cosgrove SJ. They also link up with and support Magis events and have delivered Ignatian Spirituality workshops for  Youth 2000. This Lent, in Leinster Road, for five Saturdays, they will host a series of talks on a variety of theological topics.

Myles O’Reilly SJ, who oversees the community along with Mags Mooney of the Peter Kenney Project, says this new lay community is an evolving project which he first suggested to Irish Jesuit Provincial Leonard Moloney SJ in May 2018. “The community started living together in November 2018, and really got into gear in August 2019 when they moved into Leinster Road. It is still very much at an experimental stage, and each member commits themselves to the community a year at a time by mutual agreement,” says Myles, adding that “only one member is part-time and employed by the Jesuit Province. All the community members get free board in Leinster Rd, in return for being caretakers of the house.”

According to Myles, the purpose of this new experimental community from a Jesuit point of view is to create a faith-friendly environment for young adults where they can grow in community and discern how they are being called to best serve God and humanity. He says it works with and through the church, “hearing and responding to the cry of the poor in whatever form, and taking care of the earth, our common home.”

The Faber community also helps spread the word about what Ignatian spirituality is and who the Jesuits are and what they do, says Myles, adding that they might also “inspire or draw young men to join the Jesuits and provide them with fellow lay collaborators and, vice-versa, provide lay collaborators with Jesuit companions.”

From lockdown to community

A welcoming and generous priest

A welcoming and generous priest