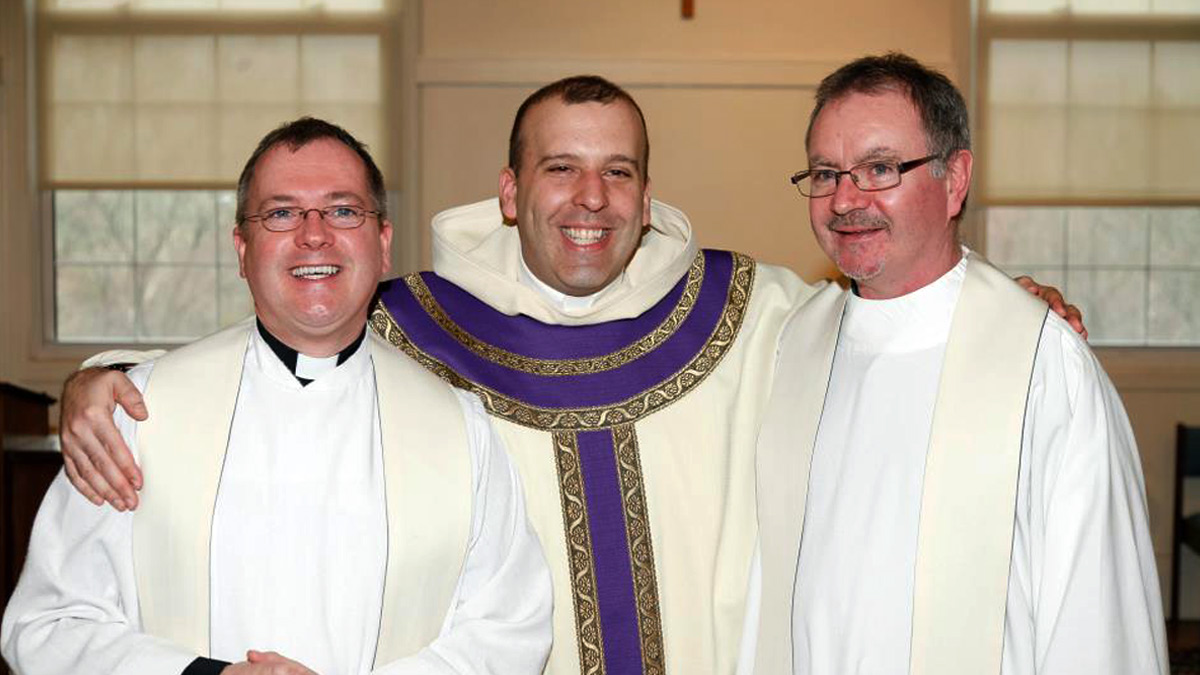 Joe Palmisano SJ, a member of the New England Province, passed away in Boston on December 25, aged 41. He had battled cancer for many years, but he finally lost the fight on Christmas day. He never lost his endearing good humour and warm personality, however. Joe studied in Ireland for many years, and he spent time in Belfast as part of his PhD at the Irish School of Ecumenics. He is very fondly remembered by Irish Jesuits, friends and colleagues. Below is an appreciation of Joe by his friend Brendan McManus SJ. Ar dheis Dé go raibh a anam dílis.

When someone charismatic dies everyone wants to claim them as their own. This is an unashamedly Irish tribute to Joe Palmisano SJ who died on Christmas day 2015 at the age of 41. He had battled bravely against a brain tumour for a number of years and finally succumbed. Though a US Jesuit he spent many years in Dublin and Belfast where he made many friends. In the reports of his funeral in Weston, MA, we read of many who told stories of Joe’s great warmth and openness, and his real gift for friendship and getting along with people. He could so easily have been Irish! He really was a man for others, who wore his considerable knowledge lightly and would willingly put himself out for others. This is what his Irish friends picked up. Many from the Gardiner Street Gospel Mass community where Joe helped out in the Irish Jesuit youth apostolate testified to Joe’s ready smile, quick wit and endless good humour. Those Jesuit community members from Campion House told about his affable presence, irrepressible quick wit and enduring deep faith. Though we weren’t witness to much of it, his final years were apparently a typical gracious acceptance and handing over into God’s hands.

Joe came from Monroe, Conn. and attended Fairfield Prep until 1993 before graduating from Boston College in 1997 with a B.A. in theology. Joe entered the Society of Jesus in 1998 and showed a talent for studies, completing an M.A. in Philosophy at Fordham University. After this his Irish odyssey began, with an M. Phil. in Ecumenics theology at Trinity College in Dublin, (2002-03). There was a two year interlude teaching religion and doing campus ministry at Campion College, Jamaica, while also assisting pastorally in St. Anne’s Parish, an experience that he deeply cherished.

However, in 2005 he returned to Ireland and graduated in 2007 with an S.T.L. degree in Systematic Theology from The Milltown Institute in Dublin. In September 2007, Joe returned to Trinity College in Dublin (TCD) to undertake doctoral studies in theology, with Jewish-Catholic dialogue as his chosen theme. Joe also found time to train as a Spiritual Director at Manresa Retreat House during this time. Two years of his doctorate studies were spent in Belfast and he stayed with the Jesuit community there. He was the first Fr Michael Hurley Post Doctoral Fellow at Trinity’s Irish School of Ecumenics in 2011-2013.

His impressive book, Beyond the Walls: Abraham Joshua Heschel and Edith Stein on the Significance of Empathy for Jewish-Christian Dialogue (Oxford University Press, 2012) contains the key to Joe’s life philosophy, that dialogue must be informed by empathy. Seeing things from the other’s perspective gives a new understanding that allows a new conversation. I am sure that Joe’s experience of the Northern Ireland peace process is also reflected here.

On a personal note, I will always remember this trip around Connemara in 2013, we had mass which Joe led at Mamean, a mountain pilgrimage site, and then caught this spectacular sunset in Spiddal, Connemara. Joe was stuggling with cancer at that stage but didn’t let it spoil the craic (fun)! Joe helped arrange my Tertianship placement in Eastern Point Retreat House, MA, in 2012 for which I was very grateful. Fr. Colin Crossey, a diocesan priest Joe knew from Belfast, and myself were proud Irish representatives at his final vows in Weston that year.

With Joe’s family, friends and Jesuit brothers we lament the loss of a great human being and fellow traveler. Just like an Atlantic sunset, Joe has gone into the light; his pain is over, he watches over us now. Ar dheis Dé go raibh a anam.

Thanks to a good Irish friend of Joe’s, Fr. Colin Crossey, who brought news of the funeral and filled in the gaps in my own rememberings.

Reflections from the Holy Land

The courage to turn inward

A spirituality of failure