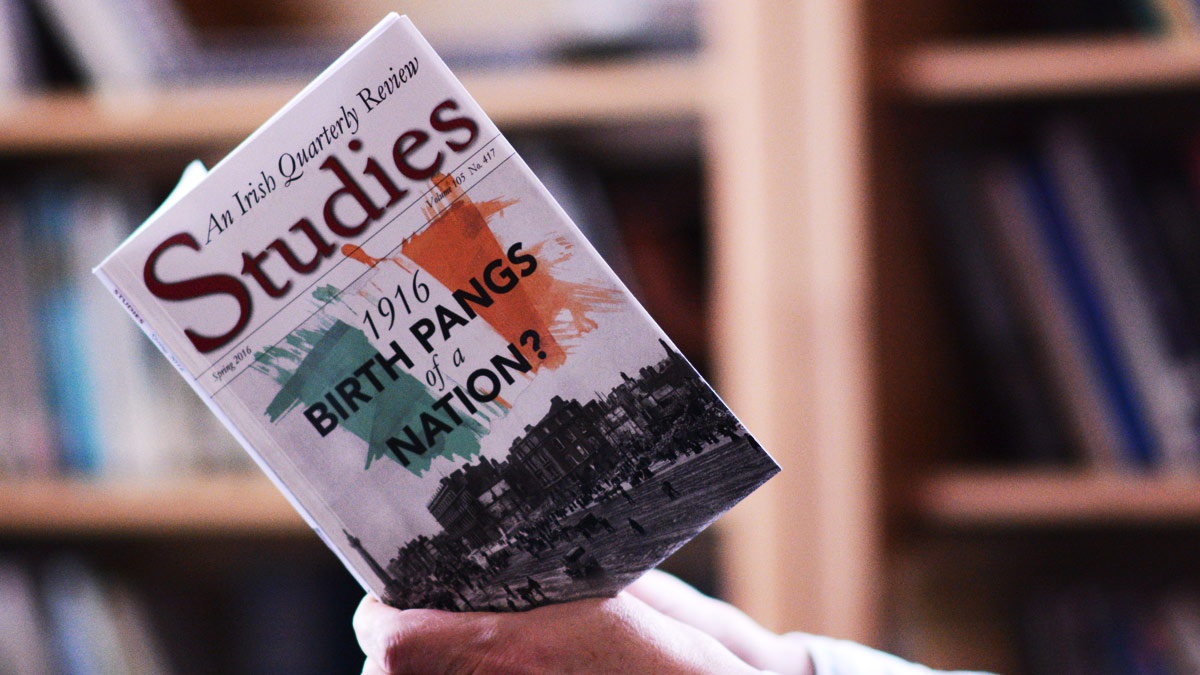 The Spring 2016 issue of Studies bears the title ‘1916: Birth pangs of a nation?’ and is dedicated to this year’s centenary commemorations. In his editorial Fr Bruce Bradley SJ notes the “rare distinction” of Studies, namely that it pre-existed the Easter Rising of 1916. He traces the journal’s relationship with that momentous event. Studies was founded in 1912. Its first summer issue contained a poem by Joseph Mary Plunkett, who was later one of the planners of the Rising and was executed after fighting at the side of Pádraig Pearse in the General Post Office. The following year, the text of a lecture on Irish literature by Pearse himself was also published in the journal.

For the 50th anniversary, Fr Bradley notes, Studies kept a celebratory tone, even choosing not to run with an article by Fr Francis Shaw SJ which savaged in particular Pearse’s vision of Irish redemption being won, in an Easter event, by the selfless blood sacrifice of military saviours. For Shaw this was overt blasphemy. It wasn’t until 1972, eight years after the commemorations – and two years after Fr Shaw’s death – that Studies finally published his ‘Canon of Irish History: A challenge’. It had a considerable impact on Irish revisionist history.

In the current issue, Seamus Murphy SJ’s article, ‘Dark liturgy, bloody praxis: the 1916 Rising’, lies in a direct line of descent from Fr Shaw’s ‘Canon of Irish history’. Murphy argues that the Rising was not only theatre, it was also liturgy. Its ‘social praxis’ emerged from its adoption of a eucharistic liturgical structure. It was an act of self-sacrificing service out of which would emerge the elements of Catholic social thought, i.e., peace, social order, the common good, human rights, solidarity, subsidiarity, and so on. According to Murphy’s analysis, if the nationalist leaders were the blood-sacrifice, the British were the scapegoat. The Rising was “a ritual driving of the British… out into the wilderness, as the guilty cause of all the trouble, whose expulsion would unite the people in peace”.

In Murphy’s assessment, Pearse and the other leaders were “not so much blasphemers as idolators”. Pearse’s vision of the blood of war as an “august homage” to God, Murphy insists, suggested a god such as Odin or Mars, but not the God of Jesus Christ. He fears that “celebrating the Rising is celebrating its sacrament”, a hate-filled non-Christian sacrament.

Other essays in this issue of Studies are less combative. Professor Ronan Fanning gives an insightful account of De Valera’s metamorphosis in 1917 from a military man to a man of politics. Mairéad Carew suggests that the cultural programme of the Free State governments of the 1920s owed much to the vision of the historian and Celticist Eoin MacNeill. And J. Anthony Gaughan sketches some less well-known details of the contribution of Professor Alfred O’Rahilly to Sinn Féin and the separatist revolution.

There are also thoughtful essays on the relationship between the Irish commemoration of its revolutionary past and that of France (Sylvie Kleinman, ‘Revolutionary commemoration and the mythologisation of history’), the survival of a skewed and simplistic narrative of the rebellion in today’s political discourse (Stephen Collins, ‘1916 and what it means today’), and the role of the Church in relation to the Rising (Oliver Rafferty SJ, ‘The Church and the Easter Rising’). This last essay notes particularly that even though the Church had often condemned the form of rebellion of the 1916 leaders, by and large churchmen were less likely to lead their flocks than to be led by them on this matter.

The spring issue of Studies is a valuable contribution to the ubiquitous examination of the foundational event of the modern Irish state and of the first hundred years of nation-building which followed it.

Go to the Studies website to purchase this issue.

Provincial asks for prayers for GC36

Jesuits and the 1916 Rising

Garret Fitzgerald on the European project

Reflecting on Jesuit times past

Evil: the label and the reality

The last parting: Jesuits and Armistice