A life of quiet faithfulness 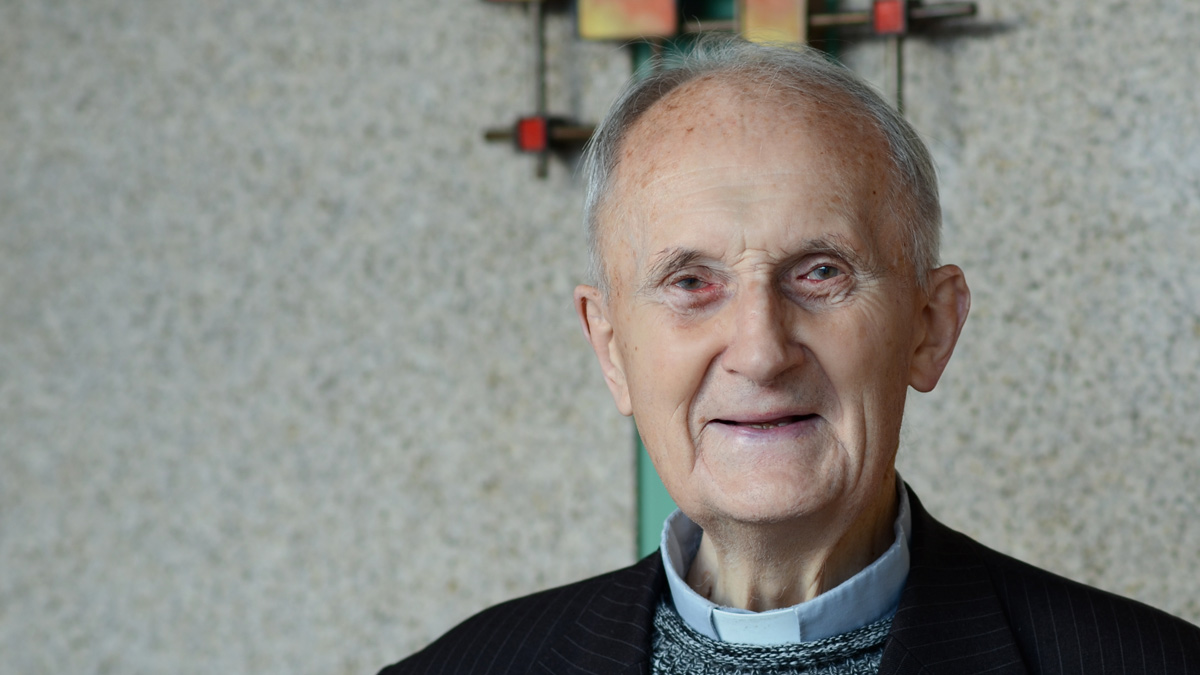 Jesuits, family and friends bid a final farewell to Hugh O’ Neill SJ, who died peacefully in Cherryfield Lodge in the early hours of  Sunday morning, 12 February. He would have been 90 on 20 May this year. He was a native of Dugarvan, Co Waterford and as a Jesuit, taught in Crescent, Clongowes and Gonzaga colleges. He was a keen environmentalist and ahead of his time in that respect. In his later years he worked on the ‘Liturgical Calendar’ for the Irish Province and edited ‘Province News’.

Fr Bill Callan, rector of Milltown Park, gave the homily at his funeral mass place in Milltown Park Chapel, Ranelagh, on the Wednesday after his passing.  Fr Hugh was remarkable for his courtesy he said, noting how many of the nurses and staff of Cherryfield Lodge referred to him as  ‘a true gentle man’.  He quoted Ella, the Polish nurse who spoke of her sadness at his death saying,“O Father, so sad: he was beautiful man, – so grateful. No matter how small the thing you do for him he always says ‘Thank you’.”  This sentiment was echoed even by the Jesuits whom he taught. David Coghlan was in his class and remembered the high jinks he and his fellow students would get up to. No matter what their behaviour, Fr Hugh’s toughest form of discipline was the admonishment – “Better remain standing”.

The Provincial, Fr Leonard Moloney also remembered his school days being taught by Fr Hugh.  He shared about the real impression he made on him and the boys when Fr Hugh inculcated in them a sense of caring for the environment, especially the trees that provided the paper they so took for granted. To this day, the Provincial said, he was always mindful not to be wasteful of paper.

An anecdote from Bill also underlined Fr Hugh’s sensitivity to the environment. “Hugh immensely enjoyed his walks, taking a bus to some remote destination at weekends and doing a circuit locally on weekdays. On these daily outings if he saw any offending litter strewn on the ground he had no hesitation in collecting it and bringing it home for disposal in the house bins. The sight of a Jesuit coming up Eglington Road and stooping to pick up litter as he went, is not seen all that often! However what might strike us as incongruous made perfect sense to Hugh: Such rubbish was a blot on the landscape and as he was passing why should he not be the one to put this to rights.”

But in the end, according to Bill, what stood out most regarding Fr Hugh and his life as a Jesuit priest was his faithful service to the God he believed in. The life he lived was sustained by quiet faithfulness, and the strong love he had for his country and his religion, he said.  This was “the key to understanding Hugh’s life: His fidelity would not make sense if God did not exist.”

Endings and beginnings in the Far East

Being a spiritual scholar

Spirituality and the professions

A message of joy from the Provincial

Into the Zambian groove