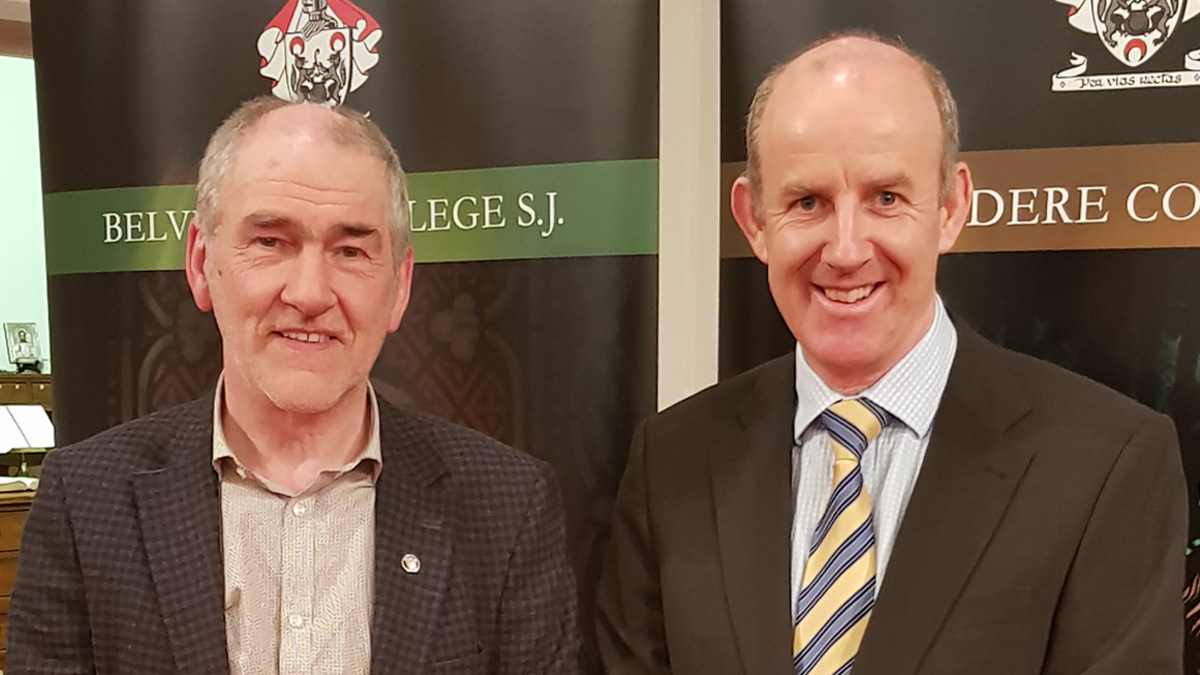 Mickey Harte, Tyrone football manager, spoke about his faith and life journey including the tragic loss of his daughter Michaela as part of the Belvedere College SJ series of talks for parents, staff, past pupils and the wider Belvedere community on April 16, 2018. The collaborative event between the Parents Association and the Pastoral Department took place in the school chapel in conjunction with the upcoming World Meeting of Families in August.

Mickey (left of photo) spoke about the battle of the two wolves in his head: one of anger and resentment and another of love and compassion. The wolf that wins is the one that we feed, he said. In the case of his daughter Michaela’s tragic death in Mauritius in 2011, he and his family chose to celebrate her life and to look for the many blessings that were given to them through her. Despite the death of Mickey’s brother shortly after his daughter’s death, he continued to feed the good wolf by celebrating the birth of his grandchild within twelve months of Michaela’s death. He believes that there are many blessings in disguise and he gives thanks to God for his life.

Pádraig Swan (right of photo), Director of Faith and Service Programmes, says: “In simple down to earth language Mickey spoke of how faith in God and prayer are a source of great consolation for him and his family”. He is a firm believer in the Holy Spirit and the power of prayer. Upon the death of Michaela, he felt deeply consoled by well wishers who gave Mass cards and assurances of so many prayers. In the packed Belvedere chapel, Mickey believed his own story could have special resonance for someone, that we are all instruments of faith to one another.

Regarding his traditional Catholic faith, Mickey spoke of his three tenets of the Eucharist, Adoration of the Blessed Sacrament, and the Rosary that continue to sustain him. His experience of Adoration has grown and deepened over the years and he plays a central role in his community for keeping up the practice. His dedication to the Rosary stems from his own childhood where he and his father used to pray in the kitchen together. It was a wonderful experience of safety and security. He continues this tradition today as a father and grandfather, for example, he gets great pleasure from saying the Rosary in the car with his 6-year-old grandchild who is able to participate in the prayers.

Pádraig Swan gave tribute to Mickey at the event: “I am sincerely grateful to Mickey for being a fantastic role model and witness to his faith in a secular age, and in particular for his humble and unassuming presence here today.”

“Parents went up to Mickey after the talk to thank him for the comfort and consolation his story brought for their own faith journey,” said Pádraig. “Others fed back to me that they were inspired by his leadership.”

In preparation for the upcoming World Meeting of Families (WMOF) in August and the papal visit of Pope Francis, parent, Fiona Owens, who works in the WMOF office, spoke at the end about the event and appealed for volunteers to get involved. Pádraig said: “A number of parents expressed an interest in volunteering. We are glad that offering this series of talks in the school enable us to reach out to the wider community. Thanks also to David Crimmins, Chair of the Parents Association, for helping to organise the event.”

The last of the three talks, featuring parents on a faith journey, will take place at the school Lecture Theatre on Thursday May 10 at 7.30pm. For more information, contact Pádraig Swan at [email protected] or 01-8586639. Also, check out the website for the World Meeting Of Families.

Talk with parents on a faith journey

Psalms for the spirit

Alan McGuckian on WMOF and abuse

The goodness of young people